Exactly How Much Water You Should Drink When You Work Out 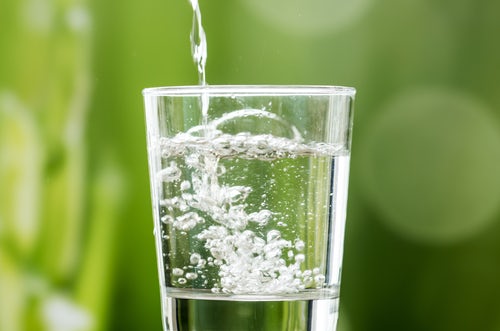 We’ve been told it’s important to stay well-hydrated when we work out, but there’s growing research that shows athletes, specifically endurance athletes such as marathoners and long-distance cyclists, can harm themselves by drinking too much water during their competitions.

The condition, called hyponatremia, is caused by abnormally low sodium levels in your blood from drinking too much water. And while it’s rare, it can be deadly if it happens.

Even more surprising, a study published in the British Journal of Sports Medicine showed that athletes perform perfectly fine when they’re slightly dehydrated.

But notice, the emphasis is on slightly.

We realize that information like this can sometimes be more confusing than helpful; that’s why we turned to sports nutritionist and holistic health coach Kate Weiler who says, “As a general rule of thumb, it is important to sip on water throughout the day to stay hydrated.”

She adds: “The amount of water you should drink before, during and after a workout depends a lot on the intensity of the workout, and the temperature of the environment where you are working out. Higher intensity and hotter temperatures lead to an increased sweat rate, which means you should drink more. A good barometer is to drink 16 ounces a couple of hours before a workout.”

If a workout lasts for an hour or longer, she says it’s important to drink even more water and also recommends natural hydration drinks that are low in sugar such as DRINKMaple (which she cofounded) because it contains “46 naturally occurring vitamins, minerals, polyphenols, antioxidants, and prebiotics.”

And while she recommends drinking anywhere between 16 to 20 ounces of water in the hour post-workout, she says it’s not necessarily a hard-and-fast rule.

“I like to encourage people to use these as guidelines and listen to your body, and adjust based on intensity, heat index, and sweat rate.”

In other words, if you’re feeling thirsty, then it’s probably a good time to drink some water.

4 Calorie-Torching Moves That Tone Your Legs and Butt
August 24, 2015
Categories