To live longer, replace 1 hour of sitting with walking daily 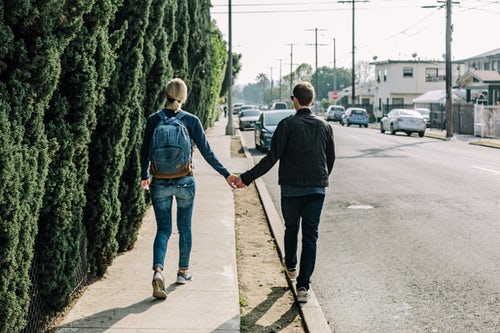 When it comes to staying healthy, the advice is endless – drink more water, exercise more, take your vitamins, eat oily fish, drink more coffee, drink less coffee. But a new study appears to simplify the key to long-term health; it suggests that by replacing 1 hour of sitting each day with walking, we can decrease our chance of early death by 12-14%.

The study, published in the International Journal of Behavioral Nutrition and Physical Activity, was conducted by researchers at the University of Sydney in Australia and included over 200,000 adults who were middle-aged or older.

According to the Centers for Disease Control and Prevention (CDC), adults need at least 150 minutes of moderate-intensity aerobic activity – such as brisk walking – every week, as well as muscle-strengthening activities on 2 or more days each week.

Although 150 minutes may seem like a lot of time, doing it in 10-minute increments over the course of the week counts, too.

Prof. Emmanuel Stamatakis, lead study author, notes that previous studies “established the benefits of adequate physical activity or sleep and the risks of too much sitting, but this is the first to look at what happens when we replace one activity with an equal amount of another.”

He and his team point to work hours, which account for over 50% of total waking time, adding that “workers in many professions spend on average more than 70% of their work time sitting.”

Sedentary activity, physical activity and sleep are all part of a 24-hour day, but the researchers say previous investigations have largely examined each behavior “without considering what time-dependent behaviors are being displaced.” Their latest study focuses on the effects of replacing the behaviors and compares this with health outcomes in general, including mortality.

To conduct their research, the team used statistical modeling of health data from study subjects who took part in the 45 and Up Study, which spanned a 4-year period.

‘Inactivity is a bigger health problem than previously thought’

Interestingly, when 1 hour of walking or exercising each day was replaced with sitting or some other sedentary behavior, the team found a 13-17% increase in early death risk.

“The results show that inactivity is an even bigger health challenge than we initially thought,” notes Prof. Stamatakis, adding:

“With the average person sitting watching 2-3 hours of TV a day, there is definitely scope for people to get off the couch and be more active.

But it’s also time for governments to realize that physical activity cannot be treated as the sole responsibility of individuals because we live in a physical activity-hostile world. Finger-pointing at people because they do not do the right thing has not solved any health problem to date, and it is not going to solve the problem of inactivity either.”

Given that there are only 24 hours in a day, he and his team say their research shows we must be scrupulous in how we choose to spend our time.

Standing is a ‘straightforward intervention’

Although the study’s strength lies in its large, population-based sample size, it does have some limitations. For example, the study variables were analyzed through a self-administered questionnaire, which does leave room for some bias and error, including over-reporting of physical activity or under-reporting of sitting time, “due to social desirability bias.”

Still, the team says their results could help with implementing a “long-term vision that makes physical activity the easy and convenient option.”

They note that data from both the US and UK reveal that, on average, people over the age of 70 spend around 65-80% of their waking time being sedentary, so substituting some of this time with standing or light activity could have a positive health impact.

“Unlike promoting physical activity, substitution of desk-based sitting for standing is a relatively straightforward intervention that has no additional time and location requirements,” they say.

The researchers add that implementing better infrastructure in our environments, including more cycleways, better-connected parks and improved public transport could seamlessly integrate physical activity into our everyday lives.