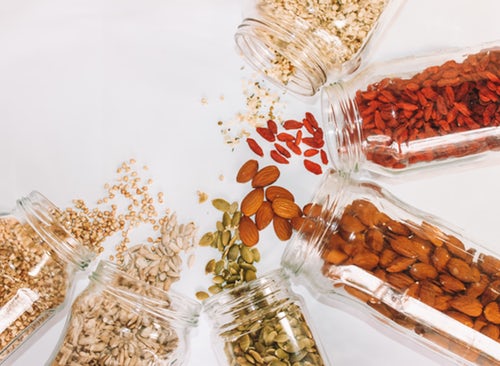 Dietary fiber is a plant-based nutrient that is sometimes called roughage or bulk. It is a type of carbohydrate but, unlike other carbs, it cannot be broken down into digestible sugar molecules. Therefore, fiber passes through the intestinal tract relatively intact. However, on its journey, fiber does a lot of work.

Fiber is important to digestion and regularity, weight management, blood sugar regulation, cholesterol maintenance and more, according to Paige Smathers, a Utah-based dietitian. It has also been linked to longevity and decreasing the risk of cancer.

Fiber can be put into two categories: soluble and insoluble fiber, according to Colorado State University.

Insoluble fiber, on the other hand, speeds up the passage of food through the digestive system. This helps maintain regularity and prevent constipation. It also increases fecal bulk, which makes stools easier to pass.

“Dietary fiber aids in improving digestion by increasing stool bulk and regularity,” said Smathers. This is probably fiber’s best-known benefit. Bulkier, softer stools are easier to pass than hard or watery ones, which not only makes life more comfortable, but also helps maintain colorectal health. According to the Mayo Clinic, a high-fiber diet may help reduce the risk of hemorrhoids and diverticulitis (small, painful pouches on the colon).

Fiber also helps lower cholesterol, said Kelly Toups, a registered dietitian with the Whole Grains Council. The digestive process requires bile acids, which are made partly with cholesterol. As your digestion improves, the liver pulls cholesterol from the blood to create more bile acid, thereby reducing the amount of LDL (bad) cholesterol.

A meta-analysis of studies regarding the relationship between fiber and blood glucose (blood sugar) levels published in The Journal of the American Board of Family Medicine found that increased fiber intake can reduce blood glucose levels during the standard fasting blood glucose test (a test of blood sugar levels after an overnight fast).

The article showed that levels of HbA1c also decreased with increased fiber. HbA1c refers to glycated haemoglobin, which occurs when proteins in the blood mix with blood sugar. It is associated with increased risk of diabetes complications.     Soluble fiber is especially helpful in this regard.

The research has been mixed regarding the link between fiber and colorectal cancer prevention. While the National Cancer Institute asserts that a high-fiber diet does not reduce the risk to a clinically significant degree, a 2011 meta-analysis from the British Journal of Medicine found an association between cereal fiber and whole grain intake and reduced risk of colorectal cancer.

A more recent animal study suggested that fiber might only cause this benefit if a person possesses the right kind and amount of gut bacteria. Fiber naturally reacts with bacteria in the lower colon and can sometimes ferment into a chemical called butyrate, which may cause cancer cells to self-destruct. Some people naturally have more butyrate-producing bacteria than others, and a high-fiber diet can help encourage the bacteria’s growth.

According to some scientists, fiber could actually help people live longer. A meta-analysis of relevant studies published in the American Journal of Epidemiology concluded, “high dietary fiber intake may reduce the risk of total mortality.”

New research suggests that fiber could play a role in preventing food allergies, the existence of which has long puzzled scientists. Again, this theory comes down to the interaction between fiber and bacteria in the gut.

Scientists theorize that people are not producing the right gut bacteria to tackle foods commonly associated with allergies, like peanuts and shellfish. Without the right bacteria, particles of these foods can enter the bloodstream via the gut. Fiber helps produce a bacterium called Clostridia, which helps keep the gut secure.

The same reasoning explains why fiber might help people with asthma. Unwanted particles escaping the gut and entering the bloodstream can cause an autoimmune response like asthmatic inflammation. A 2013 animal study found that mice eating a high-fiber diet were less likely to experience asthmatic inflammation than mice on a low- or average-fiber diet.

“Fiber is found in whole grains, beans, fruits and vegetables,” Smathers said. It is often found in higher concentration in fruit and vegetable skins.

She suggested a diet incorporating the following high-fiber foods:

People struggling to get enough fiber in their diets often turn to supplements. While Smathers reported that supplements are not as good as fiber from whole foods, fiber supplements can be helpful for people looking to regulate their bowel movements or who suffer from constipation. They also have the same cholesterol-lowering and blood sugar stabilization effects — if you can get enough of them. A supplement does not carry nearly as much fiber as a fiber-rich food like lentils or peas, so merely sprinkling powder on your yogurt probably will not get you the fiber you need.

Furthermore, fiber-rich foods are wildly high in other vital nutrients, which you won’t get if you add supplements to nutritionally void foods.

Fiber supplements can interact with certain drugs, like aspirin, carbamazepine and warfarin, according to the Mayo Clinic. They can also cause bloating and gas — just like the real thing.

In order to get all the benefits of fiber, many people adopt a high-fiber diet. When incorporating more fiber into your diet, start slowly, adding 5 g a day for two weeks, the University of Michigan recommends. If consumed too fast or in excess, fiber can cause bloating, cramps and even diarrhea. Let your body get used to having more fiber.

Smathers recommended the following tips for a successful high-fiber diet:

Sometimes, medical situations require people to adopt a low-fiber diet, at least for a time. Those undergoing chemotherapy, radiation or surgery often need to give their intestinal tract a rest, according to the University of Pittsburgh Medical Center. People suffering from Crohn’s disease, diverticulitis, inflammatory bowel disease and ulcerative colitis often maintain a low-fiber diet for a longer time.

People on a low-fiber diet should avoid high-fiber foods that make the intestinal tract work harder, like legumes, beans, whole grains and many raw or fried vegetables and fruits, according to the National Institutes of Health (NIH). Refined grains, many cooked vegetables and ripe melons, peaches, plums, bananas and apricots are still okay. But also avoid spicy foods, fried foods, tough or processed meat, caffeine, cocoa from cocoa powder and nuts.

How to Survive the Holiday Fitness Slump
November 23, 2015
Categories